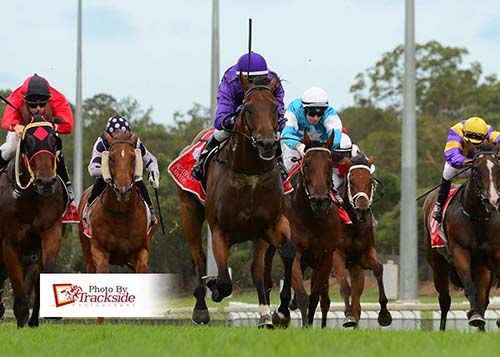 CONNECTIONS of Let’s Cheer Again will be getting sore voices.
The Hallowed Crown three-year-old made it a hat-trick of wins when he was too classy for a Class 4 (1000m) field at the Sunshine Coast on Sunday, January 19.
Despite the heavy track, Let’s Cheer Again ($1.50-fav), ridden by Larry Cassidy, stormed home to a one-and-a-half-length win.
It followed two victories over the same circuit and distance in the past month.
“He’s a very promising three-year-old,” said trainer Stuart Kendrick.
“He will now into town for a Saturday race,” he said.
The colt has earned the crack at metropolitan company.
His record now stands at four wins and a placing from seven starts.
Images courtesy of Trackside Photography.