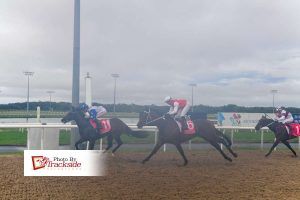 Maximum Output, ridden by Michael Cahill, completed the double for the colours.

THE Archer Park colours shone bright at a gloomy and wet midweek city meeting on the Sunshine Coast poly track, with a double to Kendrick Racing-trained horses.
Avolonte (main photo) kicked the double off on Wednesday, December 1, leading all the way in a Fillies and Mares Class 1 (1100m).
Ridden by Kyle Wilson-Taylor, Avolonte ($4.60) appears to have put some of her behavioural issues behind her, jumping to the lead from the gates and never being headed to win by a half-length.
Trainer Stuart Kendrick said the horse could be a little hot headed.
“The girls did a great job here today just keeping her nice and settled before the races,’’ he said.
“And Kyle is starting to get the knack of her, I think, in the gates too. He got her out really well today, which was important obviously on this track.
“Pretty hard to run down if you can get in front.”
Kendrick said Avolonte’s last run when second at Doomben was huge and she had needed it as she’d missed a bit of work while they did some barrier work with her.
“We sent her out to Fenwick and they worked on her and I think it’s done the trick, so hopefully she stays nice and settled like that in the barriers,’’ he said.
Kendrick said it was good to get a metro win with her.
“Good prizemoney for the owners and good for the Archer Park boys as well.”
Those colours saluted again three races later when Maximum Output won a E&G Class 1 (1100m).
Ridden by Michael Cahill, Maximum Output ($8) raced handy in second before taking over in front and winning by three-quarters of a length.
Kendrick said he was confident Maximum Output would race well on the poly track.
“He works well on this track … Some horses seem to get over it really well in work and others don’t,’’ he said.
“But they’ve got to do it under that race pressure, so obviously we don’t know until we put them under it.
“He’s a neat little horse and does everything right nearly anywhere he goes, so we were pretty confident he’d race well today.”
Maximum Output is only three but beat the older horses.