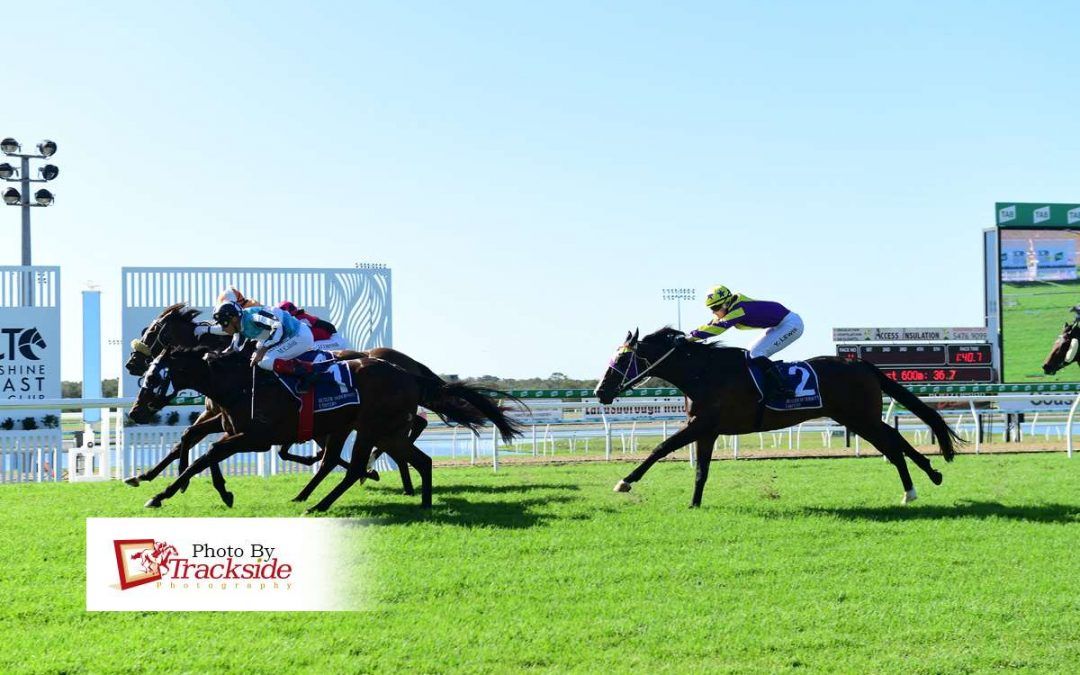 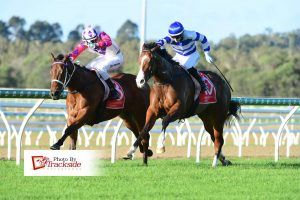 A KENDRICK Racing home track double featured mirror image wins by Choir Boy (main photo) and Knockknee.
Both horses had to really knuckle down to overhaul leaders late on the heavy track at Caloundra on Sunday, July 24.
Choir Boy’s effort was even more remarkable, given he was carrying 60.5kg.
Ridden by Michael Cahill, Choir Boy ($2.90-fav) looked at long odds to catch tearaway leader Birague in a QTIS 3YO Benchmark 62 (1600m).
But he never gave in and grabbed a thrilling win in the final bound.
“He’s only a tiny little fellow and on the heavy track today it (the weight) was just a bit of a concern,” said trainer Stuart Kendrick.
“When they skipped away on the turn I thought we were no chance of picking it up, but he just kept coming and coming,” he said.
“He’s done a great job this little horse since the boys have sent him to us and its another nice QTIS win for them, so (it is) really good.
“He’s pretty fool-proof now. I think with a spell and coming back and hopefully just strengthened a little bit, he might make that nice staying sort of horse down the track.”
Cahill said he had to let the leader go early.
“I didn’t want to ask too much of my horse early with his big weight,” he said.
“He’s put two together now. He’s not a really big horse, so he did well to win carrying the 60.5kg.”
Knockknee ($11), ridden by apprentice Angela Jones, completed the double with a similar win in a Class 4 (1000m).
Jones had to extract the four-year-old out of a tight situation about 300m out before overhauling leader and odds-on favourite Nicci Trix late.
The win followed a couple of disappointing runs on a heavy track and the poly track.
“She was disappointing last start on the poly and the start before that came out awkwardly on the wet,” said Kendrick.
“She won a trial here by a big space when Tegan rode her one day on the wet track, so I knew she handled the wet,” he said.
“It was just a matter of whether we could compete against the favourite.
“Her first-up win was really good and I thought we were in for a good prep. It was good to see her do that and get back in the winner’s stall.”