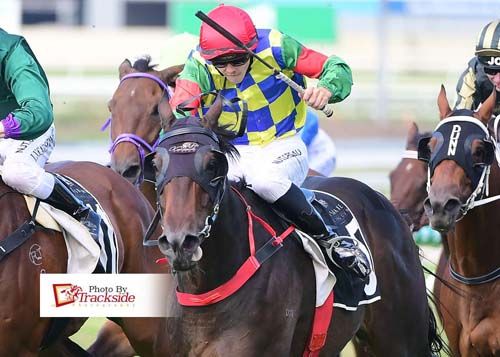 FORMER Sydney galloper Fastnet Cyclone has now run two cracking races for Kendrick Racing since arriving in the Sunshine State.
The seven-year-old gelding broke through in midweek city company at his second run for the stable, winning a Benchmark 65 (2040m) at Doomben on Wednesday, March 18.
Ridden by apprentice Adin Thompson, Fastnet Cyclone ($2.15-fav) raced midfield before coming with a well-timed run to wear down leader Consular close to the line.
It followed a good second over the Doomben mile last start when making his Kendrick Racing debut.
“He had some solid Sydney staying form before coming north,” said trainer Stuart Kendrick.,
“We’re looking forward to getting him over even a bit more of a trip,” he said.
“He’ll head to a Saturday metropolitan race now.”
Images courtesy of Trackside Photography